I found this little jewel on www.Newgrounds.com and thought I would share. Enjoy!

From Beyond ~ H.P.L. Adapted Animated Short by Michael Granberry

Saw this on the YouTube homepage, and thought I’d give it a look. Pretty good stuff for a claymation/stop motion animation. Strange adaptation of “From Beyond”, but clever none the less. 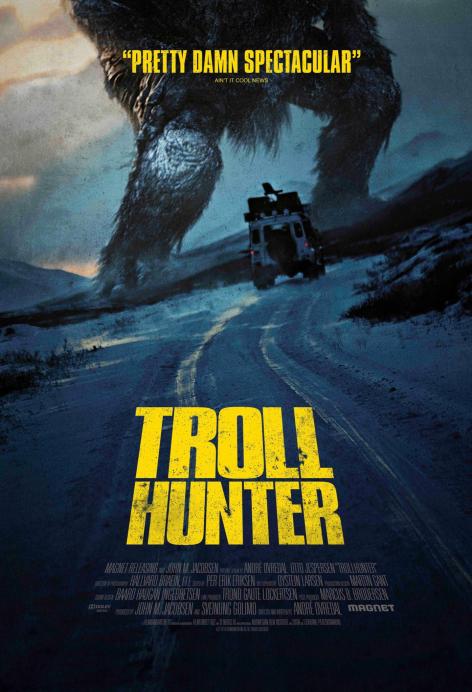 I came across this flick on YouTube about a year ago when I saw a new trailer for a foreign movie called, Troll Hunter, directed by André Øvredal. The effect of the teaser being the shaky camera, the quick movements, people screaming, and line “The most important film of our time is Norwegian.” left me thirsting for more. So when I saw it appear on Netflix’s instant watch list, I jumped at the chance to view it. Shot with the same jerky camera appeal that made The Blair Witch Project

shine, Troll Hunter brings back the old myths and legends of the Norse trolls, only to prove they’re not myths.

Something is happening in the hills and mountains of Norway. It seems bears are to blame for a lot of problems, including killing people, which galvanizes a group of university film students to follow the accounts and document their findings. But as they begin to follow a supposed bear poacher, they discover bears aren’t what’s behind the recent problems, and the poacher’s not hunting normal game. Hans (played by Otto Jespersen), they find, is a troll hunter, dispatched by a sect of the Norwegian government to dispel trolls that wander from their territory and to close to human occupied areas.

After being convinced of the existence of trolls, the students agree with Hans to follow the troll hunter and film his work. Knowing the government will not like this idea, Hans describes how the job sucks and he’s ready for people to know just how dangerous it is to go wandering in the wrong neck of the woods. He then goes on throughout the movie telling tiny stories, and giving very convincing explanations as to how these creatures have been covered up for years.

“People want natural explanations. But if you know what to look for, you’ll see what’s caused by trolls.” says Hans as he explains how a bridge collapse was caused by a troll standing up and hitting the bridge with its head.

To me this film covers all its tracks. From why some trolls explode instead of turning to stone from exposure to light, to why some have three heads.  Even the very Jurassic Park

explanation as to why there are so many high voltage powerlines crossing the beautiful mountains. After all you need something to keep the big guys contained. Right? The running joke about how the trolls can sniff out Christian blood was also a nice laughable touch. All the little details that made my skin itch with the question, could this be real? Well could it?

A film like this deserves attention, and it’s getting it, im just not sure how I feel about it. From what I hear, a remake is already in the works. Yep, it seems Chris Columbus, of Gremlins

fame, has taken the reigns over on the U.S. rights to the film, and a script is being written. It might not be true, but I read that a lot of the dialect in the original was improvised. It does seem to have that feel to it, with the casual flow, and the dry comical delivery that Otto Jespersen brings to the table. And if that’s true, I really hope that the new film would be the same. For the most part I can’t believe America has to take a NEW perfectly amazing foreign film and desensitize it so quickly.

Ah, but I digress. The bottom line is see this film! Through all of the reviews and comments I have seen for this movie I haven’t come across many bad ones. For the most part people believe that this how “found films” should be and I agree. Like I said before it left me wanting more, movie wise, and also knowledge wise. After I finished watching I jumped onto my computer to read up as much as I could about trolls, and even Norway. So it should be no surprised that since I like this movie that I give it 4 out of 5 stars in alignment. If I haven’t convinced you, well then just check out the trailer below, or the actual movie on Netflix. Enjoy!

There is something completely creepy about the idea of octopuses walking on land, well at least for me its creepy. Though it’s not uncommon to see an ocotpus outside of water for a little bit, especially for captive ones that have been known to escape and turn up in the least expected places. It is, however, rare to catch the act on film. I’m not sure exactly why this one leaves the water and seems to follow the people, but I did see that it left behind a dead crab. Maybe the octopi was protesting pollution, and decided to throw his garbage on our turf.

Maybe its all the Lovecraft reading but things that live in the ocean should stay there. I’d feel more comfortable thank you.

Skrillex – First of the Year (Equinox)

Best video I’ve seen all year. A must see!