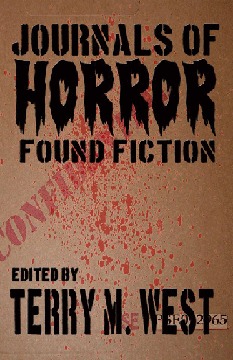 Rating: 3 out of 5 stars aligned

Sating that appetite for the weird while supplementing the idea of found footage, Terry M. West and Pleasant Strom Entertainment, Inc. have manifested from dark vaults, Journals of Horror: Found Fiction. 29 uncomforting tales of delusion and terror that will have you locking your doors, checking your phone settings and finding your journal so you can chronicle the onset of madness that may inevitably take hold. 29 authors who were fortunate enough to be released from their own straightjackets to pen some disturbing literature, instead of screaming their tales or spelling them out in missives with their medication. Oh, but enough with the Crypt Keeper treatment, lets open up this dark tome.

Anything from sensationalized pulp, to eloquent horror will be found while traveling through these pages. I myself found many of the stories to be entertaining, yet there were few that made me pause my reading and recollect my thoughts. Those were the best tales. There were stories that read like standard weird fiction, and some that read like submissions to Creepy Pasta. However, though these tales are works of fiction, the tales that teetered on the edge of truth were the ones that dragged me in. Some of these entries, for example; West’s “Bagged, Tagged & Buried,” Rolfe’s “Killing Jessica” and Leflar’s “Letter to Grandma,” exhibited masochistic tastes with dashes of schizophrenia and paranoia for flavor which, along with some other minor ingredients, developed a fun psychotic recipe for great found fiction. Bellow is a list of the stories and the authors behind them.

Now, not having read much “found fiction,” I began to wonder if this is/would/could be a new genre of fiction. Yet after a second thought, and reading, I believe that found fiction is more likely a subgenre rather than a leading criteria for any fiction. After all, some of the best stories in history are technically “found fiction.” Brom Stoker’s

The Call of Cthulhu

. Though I know Dracula and Frankenstein are more well known than Lovecraft’s work, I can’t help but first think of The Call of Cthulhu first because of it’s opening statement, “(Found Among the Papers of the Late Francis Wayland Thurston, of Boston)”

Though TCoC isn’t an epistolary formed story like Dracula or Frankenstein, by simply stating that the documents were found and are reviewed (within the story) simply opens the door for use of the term found fiction. Yet the reason I claim that found fiction would be best suited as a sub genre, is due to the fact that the three classics I mentioned are primarily categorized as horror fiction, or even in the case of H.P.’s story, weird fiction. Any genre can contain the elements of found fiction, though they may not be as potent as a horror setting, they are out there.

It took me longer than I originally expected to get through this book, as I am sure it took longer than Mr. West anticipated for me to complete the reading and an honest review in exchange for some pretty thought provoking and unsettling fiction. In that regard I ranked this collection a 3 out of 5 stars. The book could have been condensed to 20 tales and maintained a stronger consistency of quality, and a more digestible overall length of the book. As you may see above I marked, with a *, certain stories as favorites or plots that when looking back stick out the most in my mind. I have more selections from Terry M. West’s library of publications; such as, The Giving of Things Cold & Cursed: A Baker Johnson Tale

, and Heroin in the Magic Now

, along with a couple others. I am excited to dive into those soon and share my thoughts with everyone.

, or stuff from Terry M. West have also checked out:

If you have checked out Halloween Tales

When Thanksgiving Was Weird

I just caught an interesting article about a strange tradition that used to be held in the United States in the early 1900’s. Linton Weeks, over at NPR news, has dug up an old tradition that many have forgotten, or never knew about. Thanksgiving Maskers, Ragamuffin Parades, or Parade of Fantastics, call them what you will, judging by the photos on Mr. Weeks’s post, Thanksgiving used to look a lot like Halloween. 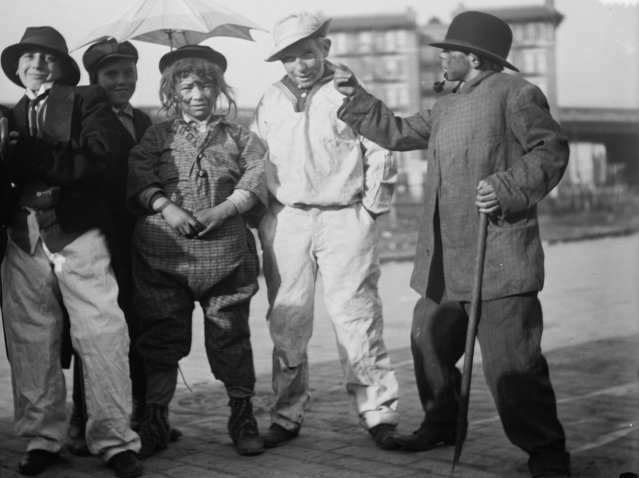 So many people took part in this tradition that the mask making industry could hardly keep up. “The busiest time of the year for the manufacturers of and dealers in masks and false faces. The fantastical costume parades and the old custom of making and dressing up for amusement on Thanksgiving day keep up from year to year in many parts of the country, so that the quantity of false faces sold at this season is enormous.” – Los Angeles Times, November 21, 1897. 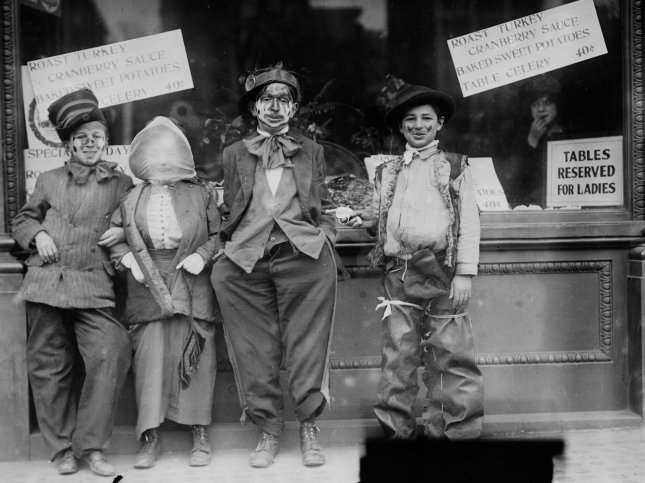 The young masqueraders would slink along the streets pan handling for pennies, apples, or other goodies, when asking “What’s for Thanksgiving?” It would be no surprise if you found yourself handing over a delicious candy to a faux Charlie Chaplin doppelganger or a creepy young lady with a nylon screen over her face for a mask. Ahh memories. Good stuff from Linton Weeks, and I highly suggest you check out his article to discover more of the forgotten truths and traditions of Thanksgiving in America. Click here to check out the strange side of a beloved tradition.

After photos surfaced Tuesday of an apparent “Gollum” creature spotted near the Great Wall of China, the story went viral. Within a day tens of thousands of comments and speculations collected as to what the thing could be. Anything from a hybrid pig man, to an actual “Gollum” (A character from J. R. R. Tolkien’s The Lord of the Rings/The Hobbit books) or an ancient lineage of mountain folk being discovered. All the talk got people pretty excited, as will happen when these possible hoax photos pop up.

But new controversy has sprung up after a young man has come forward with not only his testimony, but with photos of him in makeup and being photographed for a local advertisement. However, though it seems very likely that that is the case, some folks have began to point out marked differences in the photos taken by a wayward hiker, and those provided by the young man in the costume, such as; why are the ears slightly shaped different? Or why do the eyes look smaller or closed, when in the costume they are gaping holes. The initial photos by the hiker have been proven authentic and not modified, yet I still see what maybe shoes on the creatures feet, which made me curious before I found that this may all be a hoax. 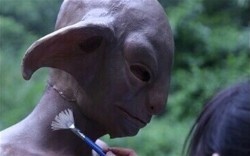 Along with these differences come a string of questions in regards to why a hiker would spot this “guy in a costume” and no photographers or crew shooting the young man. The hiker explains that while he was on his journey, near the Great Wall, that he was struck with fear as he spotted a bronze skin toned creature drinking water from a small pond (Below.) 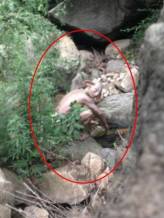 In comparison to the photo of the man in the costume, I am curious as to how he is able to drink with his hands through the mask. Not only that but I feel as though the eyes and ears look slightly different in the photos supplied by the hiker.

Either way, its always fun to have a new hoax to speculate about. I feel people gasp tightly to these kinds of false discoveries because we need something new and different in this world. Hence the reason people are so keen on finding bigfoot, the Loch Ness monster or aliens. It gets our imagination running at full speed. It scares us and exhilarates us. It makes us feel alive when we find something strange or unlike us living and reminds us that maybe, just maybe we humans aren’t so special in a world, or universe full of possibilities.

The Drabblecast: The Parasite Parade

My friends, if you haven’t been listening to the podcast, The Drabblecast, then you might be no friends of mine. I take that back I need all the friends I can get. But if you haven’t checked out the fabulous work done by the team at The Drabblecast, then you are missing out. Hosted by Norm Sherman, The Drabblecast is a weekly podcast that brings you full audio productions of some of the brightest and weirdest fiction out there. Anything from the diabolical floaters in your eyes becoming sentient organisms, to otherworldly entities possessing a teddy bear and saving an abused girl from her mother.

Great stuff here folks, and you shouldn’t be missing it. Below is a video that Norm and the family have posted on YouTube, entitled: The Parasite Parade: A children’s book. This is a proper example of how creepy/weird the imagination of Mr. Sherman really is and the production value that goes into every episode. Though the episodes are mostly heard, rather than seen, you won’t be disappointed while you listen to some of the most fantastical or horrifying literature read to you along with scores of music to accompany the tale while creating an ambiance that you just can’t get out of reading these stories.

The latest episode, Local Delicacies is out now and awaiting your ears. You can download The Dabblecast where ever you listen to podcasts (i.e. iTunes,) or you can just go to Drabblecast.org and browse their archives including over 300 episodes of weirdness and hilarity.

If you have checked out The Drabblecast, let me know what you think by leaving a comment. And if you like all the tasty bits we gibber about here, become a follower or submit to receive email updates with every new post! Check us out on Twitter @UnspkbleGibberr and on Facebook at http://www.facebook.com/UnspeakableGibberer