The Phoenix Branch of The Cult of the Yellow Sign 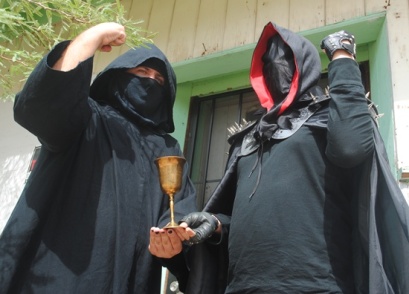 It seems the thousand year old Cult of the Yellow Sign is finally getting the attention it deserves. First exposed in Robert Chambers early works, The King In Yellow, the Phoenix branch of the ancient cult have begun to reach out to their community and embrace social media to further their ranks. When their not attending things like Home and Garden Expo’s, harrasing street preachers, or planing birthday parties for “Uncle Howie” a.k.a H.P. Lovecraft on the 20th of August every year, the “doomsday cult” claim themselves to be a comedic prefomance art group.

I was happy to catch an interview of the two head clut members, #138 and #808 on the Phoenix New Times blog site, couldnt help but laugh as the two answered questions about their plans to end the world, and the agenda for their Lovecraft birthday bash. Along with witty remarks to all the questions shot at them, one of the best answered questions was on the location of the cults headquarters:

“Where is the cult headquartered? 138: In the frozen city of Y’ng’mar in the center of the hollow earth, which orbits around a black sun and lit entirely by blue fungus, you may have heard of it?

808: We have a portal over by the Irish Cultural Center. Also, the Margaret T. Hance Park has a bridge where underneath they used to have all those folk-punk shows. We had a little portal built in there too. The Trunk Space has been especially good with us, letting us do our annual Lovecraft birthday shows there.”