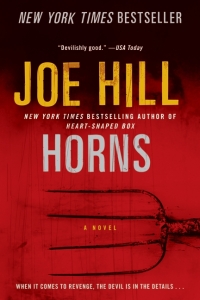 When it comes to revenge, the devil is in the details.

Ignatius Perrish’s girlfriend, Merrin Williams, is dead. One year to be exact and good ol’ Ig hasn’t taken it very well. Once a prime suspect in his beautiful Merrin’s rape/murder, he has lost friends and has become the town pariah. After a night of debauchery and hell raising to commemorate his hate for the god who took his love and a wish to find her killer, Ig wakes feeling like hell and with no understanding of the night before. But what ever happened he just can’t mentally justify the sudden growth of two pointy horns that seem to be sprouting from his skull.

Horned and aching from the previous nights ramble, Ig heads out into the dark world and begins to glimpse things of an even darker nature. Any who notice Ig can’t help but to spill their darkest secrets of sin, be it lust, gluttony, greed, sloth, envy, pride, wrath, or a combination of any cardinal vice imaginable. Even when encountering his family, they tell him how much they hate him and wish he would die for killing Merrin, even though he didn’t do it. With a single touch Ig can suddenly swim in everyone’s thoughts and memories and see their inner evils, good deeds, and triumphs. Equipped with what he starts to believe is the power of the devil, hence the horns, Ig finds new purpose in life as he walks the line between good and evil, and punishes those who cross over to the wrong side. After all, “…if God hates sin and Satan punishes the sinners, aren’t they working the same side of the street?”

. I genuinely liked this book and I will just say it outright, that this is one I recommend to everyone. Joe Hill’s ability to penetrate his characters psyche and let us in is at times a frightening and beautiful experience. Some moments, I caught myself sneering away from the words on the page, feeling disgust (in a good way) toward some of the situations in the book. This onset of discomfort or general unease made me admire Hill’s style. It’s been a while since an author has made me feel such emotions that kept me turning the page and not putting the book down.

It may sound weird, but along with all the double entendre’s placed so delicately in the story (The Pit restaurant, deviled eggs, Terry’s show Hothouse, and the devil matches), I also felt that Horns

had qualities of Dante’s, The Divine Comedy

. Even though the laughs aren’t scarce in Horns, I feel it was a parallel allegory to Dante’s tales, in which a man’s soul takes a difficult journey towards God, where in Ig Perrish’s case, it’s an allegory to Ig’s journey toward the Devil and finding his loves soul. Like I said, an impression I felt while reading.

Something I found interesting is a close resemblance to Joe Hill’s fathers work. By the way, in case you didn’t know it, Stephen King is Joe Hill’s dad. Besides an obvious interest in the darker side of fiction, I found the flashback sections to be a touch of King’s style. Where I don’t usually like it when King utilizes this tool, though he does it effectively, I feel it is a risky move to stray away from the current plot to past experiences that don’t always come full circle and can feel like dead information in the story by the end of the story. Hill however takes the chance of stepping back from Ig’s current problem with his horns and masterfully ties up all the loose ends before the book is over.

Over all, this is one of my new found favorites. I plan on moving on to his other works in the future, and am looking forward to the live action adaptation of the book staring Daniel Radcliff. Hope Hollywood doesn’t ruin this one like they have half of his father’s book to movie productions. Also, something to look forward to is Hill’s upcoming novel, NOS4A2

,coming out in the end of April. Follow the links to pre-order your copy today!

If your interested in the works of Joe Hill and want to take a look at some of his other publications I suggest the following choices. It’s a start in the least, and a selection that I will hopefully get to rifle through soon. Enjoy!

If you have checked out Horns

Stephen King has always openly stated that H.P. Lovecraft was/is one of his biggest influences on his writing, and through a few stories that is easy to point out. Recently I read a post that Mike over at the Lovecraft eZine had put up about one of King’s more recent Lovecraftian stories, N. Appearing in Just After Sunset: Stories

in 2008, N., is a story that pays homage to both Lovecraft and Arthur Machen.

In Mikes post about N., he shares a string of 25 videos that tell the story of N. in comic book form. Thanks to some of the artists at Marvel.com, we have been blessed with visual take on the horror of patient N. I have the trailer posted here, but for an entire list of all 25 episodes check out the Lovecraft eZine’s post here.