Some of the best pens of the Los Angeles chapter of the Horror Writers Association have been conjured by Omnium Gatherum to summon tales of fear and fancy for this Halloween season. 19 tales from literary horror veterans and newbies to the genre that together make a wonderful coffee table read for the season. As you can see by my rating I wasn’t too impressed with the contents of this book, however there are few pieces of sweet fiction in this candy sack that outshine the other sour suckers and kept me going through the collection in hopes of finding other good pieces at the bottom of the bag.

Unfortunately there weren’t many of these stories that left me chilled or stunned. If not for stories like Terry M. West’s “The Hairy Ones“, and bits and pieces of Steven W. Booth’s “The Lurker” I would not have felt those feelings at all. However I must give full credit and appreciation to Lisa Morton’s “The Devil Came to Mamie’s on Hallowe’en” and David Winnick’s “The Cross I Bear. ” Those two tales were two amongst a few that were narrated or seen through the eyes of a child or early teen, and I found those stories to be the most interesting. The innocence in Mr. Winnick’s story really left me in aw, though some have said it was funny, to me it was honest and dark.

Though it’s not a book I would recommend to everyone, I would say it is a nice piece in a collection of stories to have on hand for this time of year. Al 19 tales are easily digestible, and short enough to read in one sitting. True, some are better than others, but that is how a well built anthology is, unfortunately I wish the stories were a little bit more balanced. By that I mean I felt all the greats were in the front of the book and not so much in the middle or tail end. Either way it was good to dive into some suitable fiction for the month and season and am glad to have been introduced to a few of these authors fiction. I will be keeping an eye out for them.

, or stuff from Omnium Gatherum, have also checked out:

If you have checked out Halloween Tales

Weird Review: My Name is Dee by Robin Wyatt Dunn 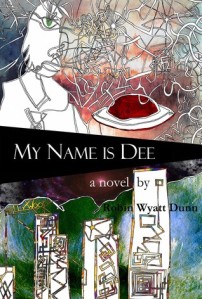 Title: My Name is Dee

Rating: 2 out of 5 stars aligned

John Dee is a magician in Los Angeles. He is going Insane.

That single sentence captured my interest. It is also that sentence that begins the blurb on the back of the book. I have always found stories with mad magicians/wizards to be fairly destructive and entertaining, so I was sold, but the rest of the description is laced with plot outline and intriguing sentences such as, “…a novel for the educated reader who enjoys noir action, intrigue and dark romance, for the child in all of us who wants to go on adventures, and for the fearful adult who marvels at the terrifying scale of the universe.” With those words I felt a challenge, as if I was supposed to say, “Yes, yes I am an educated reader who, for the child in me, likes adventures and as an adult am fearful and marvels at the scale of the universe!”

I was contacted by Robin Wyatt Dunn back in March in regards to reviewing his forthcoming novel, My Name is Dee

. I didn’t even hesitate in answering his query by telling him I would love to do so. It took a couple of weeks to receive the review copy, and a little longer before I was able to read it. But as I waited to dive into the book I looked up Mr. Dunn and his previous work. Robin Wyatt Dunn lives within Echo Park located in Los Angeles, California. The 33 year old writer has been a very busy the last couple years, publishing over 40 short stories, poems, and flash fiction in a number of places, such as Phantasmacore, and The Blue Hour. He also has contributed stories in anthologies from West Pigeon Press, Echelon Press, and Postscripts to Darkness. Robin was kind enough to send me a free version of his prose poem, Son and Woman, published with Smashwords. Dunn’s style is like nothing I have seen before. Which is good. Though sometimes a little difficult to follow, he always manages to punch the reader in the chest with strong emotion, giving his pieces a mood that helps carry the reader along. This pre reading of the authors work made me more excited to enjoy his book. Unfortunately I was not as impressed with the novel as I had been with his shorter works.

As I began My Name is Dee, I noticed a series of breaks on the pages that jumped from scene to scene. I thought it might only last through the first few pages, like a series of flashbacks that feed the story, but it turns out that that’s how the book is formatted. Along with the jumps I found some of the character dialogue to be awkward and hard to follow at times. Time has become muddled through some rift, I think, causing the breaks. Or is everything so out of place because the main character has gone insane? I don’t know. Finding the book hard to follow lead me to reading it out loud to myself. Somehow that made things a little easier to put together, though with the constant setting and character shifts I felt like I was putting together a complex puzzle. Each new scene representing a disassociated piece of info that is intended to fit with another piece of the story, ending with all the bits falling together, if you can remember them all.

The plot itself was an interesting concept. The reveal of an opposing force, the Foo, a.k.a. aliens, and the greater reveal of Chai, the powerful presence that Dee has gotten the attention of, were nice highlights. I especially enjoyed the idea of writers being this profession that needs protecting. As I read I kept waiting for some Lovecraftian reference to the John Dee copy of the Necronomicon, as mentioned in H.P. Lovecraft’s, “The Dunwich Horror“. Unfortunately no mention of that, at least that I saw, but a small mention of Cthulhu in regards to the Children of the Corn

Overall I found reading the book to be more work than pleasure. The effort it took to stay focused on the bits and pieces needed to build the story was exhausting at times and caused me to do a lot of back tracking to previous scenes. Maybe after all I’m not the educated reader I thought I was, or I just couldn’t find the right setting to read it. Either way it just didn’t jibe with me. I cant say I recommend the book, but I urge readers to take a look at Dunn’s other works. A list of them can be found here.

Get your copy today at Amazon.

If you have checked out My Name is Dee