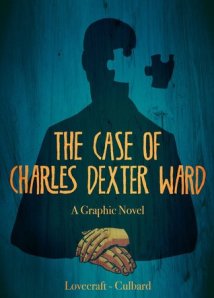 Providenc Rhode Island, 1928. A dangerous inmate disappears from a privat hospital for the insane, his method of escape baffling the authorities. Only the patient’s final visitor, family phusician D. Marinus Bicknell Willet – himself a piece of the puzzle – holds the key to unlocking The Case of Charles Dexter Ward. A macabre mixture of historical investigation grave-robbing and bone-chilling revelation, this adaptaion artfully lays bare on of H.P. Lovecraft’s most horrifying creations.

“…do not call up any that you can not put down.”

“I.N.J Culbard’s illustrations of Lovecraft’s emotions are amazing and enrapture the reader into a world of questionable identities and the insecurities we all encounter. They are emotions that Lovecraft reserved for himself and, I believe, is the reason he initially withheld the tale in fear of disclosing his own sense of not-belonging during the time of his life.“

, for Haunt of Horrors Press. Culbard is at it again, with his beautifully illustrated vision of one of the late Lovecraft’s best works. Any fan of Lovecraftian literature is in need of having this adaptation on their shelves, next to the rest of their moldering tomes. Happy reading!

Check out the whole review HERE!

If you have checked out The Case of Charles Dexter Ward 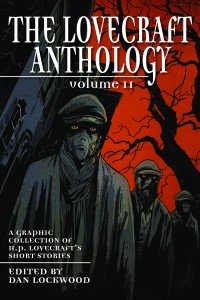 Publisher: Self Made Hero

“That is not dead which can eternal lie…”       Out of the uncharted places of the world and the prodigious imagination of Howard Phillips Lovecraft, renowned master of the eerie, come nine nightmarish tales of terror. From the dreaded remnants of long-dead civilisations to unhallowed monstrosities scheming in the darkness, Lovecraft’s stories have never lost their power to astound and unsettle. This graphic anthology breathes new life into classic works of weird fiction.       “…and with strange aeons even death may die.”

Looking back on my review for The Lovecraft Anthology: Volume 1, I have reflected on some of my comments. To this day, I still visit the pages of volume 1, and have to disagree with some of those late comments. Though I still believe the illustrated panels are what make up an efficient comic/graphic novel, it is the words we rely on when our eyes get ahead of us and we need to read whats happening to interpret the image. After all, we’re readers not viewers of these works. That said, most of these works are illustrated so brilliantly that my eyes hardly touched a word. I am very familiar with Lovecraft’s work, and know a few of his tales like old songs. So for a lot of these addaptations I was fortunate enough to know what was happening and only needed the images to carry me through.

In the tradition of how I formatted the review for Volume 1, I have listed each adaptation and have a small something to say about each.

Pickman’s Model, adapted by Jamie Delano, illustrated by Steve Pugh, Staging by Jon Haward: Right out the gate Dan Lockwood enlists one of his best choices for this collection. Delano, Pugh, and Haward have worked magic into bringing this piece to life. Every panel, every phrase took me down into the cellar with Thurber and Pickman and had me filling in the blanks as to what damnable creations Pickman was responsible for. Great stuff!

The Temple, adapted by Chris Lackey, illustrated by Adrian Salmon: Everything about this entry is spot on. The hard shapes, thick lines, and heavy shading are appropriately placed for the era this story is set in. You can tell Lackey has a fondness for the tale and does what he can to capture the images meanings.

From Beyond, adapted by David Camus, illustrated by Nicolas Fructus: Another grandslam for this graphic collection. Great accompaniment by Camus, but anyone can tell, Nicolas Fructus gets what this story is about. Amazing fuscia/violet panels that has set my pineal gland a fire!

He, adapted by Dwight L. MacPherson, illustrated by Paul Peart Smith: I really dislike Lovecraft’s original story, however I believe MacPherson and Smith have done and excellent job with a crappy tale. The illustrations weren’t my favorite but I did enjoy the protagonist looking just like H.P.L.

The Hound, adapted by Chad Fifer, illustrated by Bryan Baugh: I feel this adaptation took on a bit of the Harley Warren/Randolph Carter archetype, St John being the dominant male figure. Baugh’s sepia skinned panels stand out from the other adaptations in this book, while Fifer adds a comedic style to the dread he portrays.

The Nameless City, adapted by Pat Mills, illustrated by Attila Futaki, Colored by Greg Guilhaumond: A clever recreation of a fundamental Lovecraft piece. The ending was unfamiliar, though it may have hinted to a possible “origins” tale of the Terrible Old Man…Maybe…

The Picture in the House, adapted by Benjamin Dickson, illustrated by Mick McMahon: To me the story is best told as a literary tale, maybe even a short film. Unfortunately the backwater dialogue is pretty hard to follow panel to panel, and McMahon’s illustrations did not captivate my attention.

The Festival, adapted by Simon Spurrier, illustrated by Matt Timson: This is my favorite adaptation in this collection. Changing up the format a little to more of a picture book quality, Spurrier and Timson have portrayed a horrifying experience that leaves the reader still wanting to visit Kingsport again and again. I only wish this was the closer in the collection.

The Statement of Randolph Carter, adapted by Dan Lockwood, illustrated by Warwick Johnson Cadwell: I don’t have much to say about this adaptation. Closing out the collection and with one of H.P. Lovecraft’s best known short works, I thought this would have been done better. Didn’t care for the illustrations, and the writing did little to keep me interested.

All in all, I would recommend this volume over the first. Both are a must if you are an H.P. Lovecraft fan, and just necessary to have to stimulate ones imagination. Again, Dan Lockwood has done an amazing job gathering these brilliant artists and writers to collaborate in creating such great work. This is what feeds the Lovcraftian community and what grows the population of new readers of the late mans legacy. As I said while closing my review for volume 1, I really hope that these volumes continue to be made. I know there are only so many short stories that one can adapt (We’ll leave the larger adaptaions to I.N.J. Culbard!) but maybe new artist can give their take on a tale and give us some new perspective. This review took me a pathetic one year to complete, and in a way I am happy it did. I read it in a white heat, immediately following The Lovecraft Anthology: Volume 1, and didn’t have the best opinions of the work. After a year of continuous viewing of volume 2 I have come to the conclusions you have already read. My thoughts on volume 1 have changed as well, however I must leave my initial thoughts on the piece as they are. Either way I hope you enjoy both volumes as I have and continue to do. Cheers.

If you have checked out The Lovecraft Anthology: Volume 2 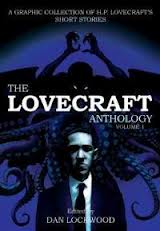 Rating: 4 Out of 5 Stars Aligned

“For what has risen may sink…”        Out of the dark corners of the earth and the still darker imagination of Howard Phillips Lovecraft, renowned master of the eerie, come seven sinister tales of terror. From cosmic horrors gibbering in the night to uneasy stirrings in the boundless depths beneath the seas, Lovecraft’s stories have never lost their power to amaze and unnerve. This graphic anthology breathes new live into classic works of weird fiction.        “…and what has sunk may rise again.”

When it comes to Lovecraftian based graphic novels/anthologies, though the writing takes a big role, it seems the whole package rises or sinks with the art. Lovecraft’s work was visceral. It created disturbing images that we had trouble correlating and left our minds troubled with confusion. Through his words he tried to show us other dimensions, and described creatures and forces outside any human comprehension. So, how does one exactly draw blasphemous fish-frogs of nameless design, or ink a color out of space?

The Lovecraft Anthology: Volume 1 is courageously edited by Dan Lockwood, and is penned and inked by some of arts greatest devotees to Lovecraft’s mythos. This volume contains seven adaptations by different writers and artists and is a great collection.

The Call of Cthulhu, written by Ian Edginton, Illustrated by D’Israeli: A great story to open this anthology, though I felt that it missed some of Lovecraft’s best moments. D’Israeli’s style isn’t my favorite, but his depiction of Cthulhu and the M.C. Escher-like R’lyeh were the best panels of this adaptation.

The Haunter of the Dark, written by Dan Lockwood, illustrated by Shane Ivan Oakley: Definitely not my favorite retelling in this anthology. The best panel was the conclusion

The Dunwich Horror, written by Rob Davis, illustrated by I.N.J. Culbard: I wasn’t much of a fan of I.N.J Culbard’s adaptation of At the Mountains of Madness, and I feel that his art is generally not very Lovecraftian. That being said, I was surprised at his attempt with this story. Along with great writing, Culbard’s vision left me wanting more.

The Colour Out of Space, written by David Hine, illustrated by Mark Stafford: This is one of Lovecraft’s greatest unnerving and unexplainable tales, making it one of the most difficult to visually adapt. Good news is Stafford does a valiant job with twisted images that carry this adaptation to the end.

The Shadow Over Innsmouth, written by Leah Moore & John Reppion, illustrated by Leigh Gallagher: At first I didn’t like this one, but the more I reviewed it the more I enjoyed Gallagher’s classic comic book style and hollow white eyes.

The Rats in the Walls, written by Dan Lockwood, illustrated by David Hartman: Were Lockwood’s writing fails, Hartman’s creepy/gory Disney-like illustrations did this tale justice.

Dagon, written by Dan Lockwood, illustrated by Alice Duke: Lockwood finally shines in this anthologies final adaptation. Accompanied by Duke’s lovely imagery, Lockwood triumphantly wraps up with one of Lovecraft’s most original stories.

Overall the artists are what make this book what is. Though I wasn’t fully impressed with all of Dan Lockwood’s adaptations, he still effectively edited an amazing looking graphic anthology. It is truly good to see how others view Lovecraft’s work, and fun to see how untraditional some folk’s visions are, I like that. I have already begun going through Volume 2, and am pretty impressed so far. I hope Self Made Hero continues to pump these volumes out. I have read/looked over Volume 1 many times and still can’t get enough of it.

If you have read The Lovecraft Anthology: Volume 1, let me know what you think. And if you like all the tasty bits we gibber about here, become a follower or submit to receive email updates with every new post!