Rating: 4 Out of 5 Stars Aligned

WHAT MAKES YOU HUMAN? YOUR BODY? YOUR MIND? YOUR RELATIONSHIPS?

IMAGINE A UNIVERSE WHERE ALL OF THESE ARE PROGRAMMABLE. THE LIMITS OF YOUR CURRENT BODY NO LONGER APPLY. YOU ARE DIGITAL AND IMMORTAL.

James Watson is suffering from a delusional disorder known as capgras, or so he’s been told. Nothing seems to feel entirely real since the accident. His wife, his kids, his friends, all feel disconnected from what he once remembers, like no one is who they seem. Feeling misunderstood, James finds help with a local psychiatrist who specializes in capgras delusions. Hoping to find his place again in the ‘real’ world, he agrees to meet with other sufferers to talk, and learn from one another. However not all of the capgras sufferers believe what they’ve been told. After hearing them out James encounters a strange man with a strange purpose. Suddenly a door has been opened to James possibly revealing the answers he is looking for. Will he be able to cope with the truth? Or more importantly, will he be able to live in a Transreality?

Chris Lackey has come out of the gate in full force in this, his first solely written and illustrated graphic novel. Captivating illustrations, varnished with vibrant colors and detailed cel-shading, bring each panel together along with dynamic writing to tie together both the emotion and expression of each fantastic character. Though the story is, at times, derivative of other plot lines like The Matrix

, or even Total Recall

, there was one part of the book that made me think of Bill & Ted’s Excellent Adventure

. When Septimus arrives, initially saving James, I immediately thought Lackey had used George Carlin as a model for the character and creating his own ‘excellent’ Rufus – Morpheus cross over. It was little remembrances like this that amused me and kept me going. But something more interesting were the themes Lackey induces unto the reader. 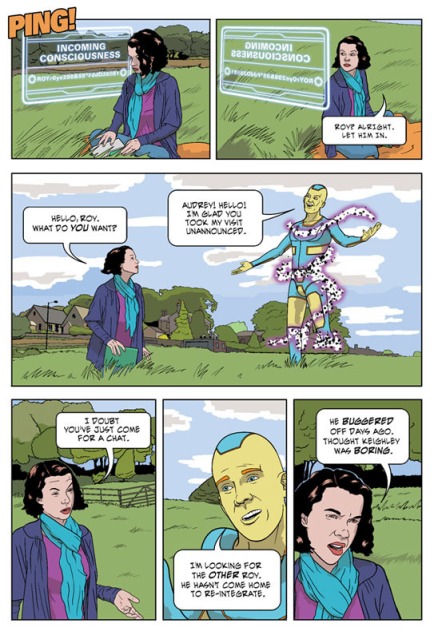 I am a complete stranger when it comes to the concept of trans-humanism, which is the belief or theory that humans will evolve beyond its current physical and mental limitations by means of technology. I have heard small talk about the singularity and mind-melds with computers, and frankly it kind of freaks me out. Though immortality and information at the request of a thought sound pretty cool, to me, there seems to be nothing human about being downloaded and coded into a digital world. I think that is one of the themes of this story. How does one maintain a sense of humanity in a world were humans aren’t the only ones in charge. There are many levels to Transreality ‘branching’ off too; what defines humanity? How does one maintain that sense while being practically detached from a physical body? Who’s behind RainBird Industries? Who is behind the control panel, so to speak, that keeps all the simulations and digital consciences in check? All are great things to think about and to hope Lackey someday expands on in either a series of comics, or more Transreality world based graphic novels.

This is a story that anyone can enjoy whether or not science fiction is your genre of choice. I myself am more attracted to horror/fantasies but this has switched on a new found interest in trans-humanism Sci-Fi. I was able to read it in one sitting, which isn’t always easy due to time or general interest in the story, and was able to follow the storyline easily. Stay up to date at the official Transreality site to find out when and where you will be able to pick up your copy. As of right now, publication in the U.S. is due out in March. Keep your scanners on and ready to locate and digest this fabulous work. 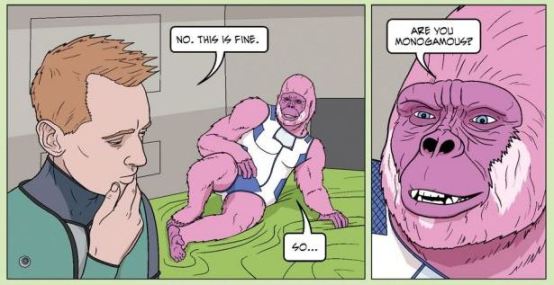