Rating: 4 out of 5 stars aligned

Back in 2012 the popular site io9 had a post with a very appealing picture that was their call to arms to create a Lovecraft/Tesla team-up comic for all of us to love. It looked sort of like this: 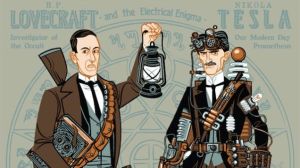 The image sparked all sorts of wants and protests for someone to establish a decent storyline where these two obscure characters in our history could investigate and dispatch the paranormal/occult. And thank the gods those wants and protests were heard and have been answered with John Reilly’s Herald: Lovecraft & Tesla.

This alternate history series there are a lot of things that didn’t jibe with me. That is until I came to terms that this comic series is an extreme alternate history twist from what I am used to. This was particularly difficult due to the fact that I consider myself a very (very very very) amateur Lovecraftian scholar, so when the years/time didn’t match up, and he was living with his mother still threw me off. However the sheer cleverness of this opening issue has compelled me to become a fan.

In this world Tesla is engaged to the very brave and prideful Amelia Earhart. When the future Mrs. Tesla takes off on her famous flight, Nikola becomes fearful of the equipment his darling is using make history. After seeking advice from his close friend, Einstein, Tesla heads to the home of famous alternate dimension aficionado, H.P. Lovecraft.

Though there isn’t a lot of action in this first issue, the creators of this comic have done an excellent creating this alternate world and its characters that are so familiar that one can’t help but cross the threshold of our current knowing of these two figures and believe in something a little more fascinating than reality. Along the way you will see other historical figures, such as: Harry Houdini, Albert Einstein, Amelia Earhart and of course H.P. Lovecraft. I can’t wait to see who else we will see…

From what I understand the second issue is to be released digitally on Comixology today, November 5th, so while your there checking out the first issue, be sure to just add that one to your cart to. You will not be disappointed. For all updates on this project and new issues check the status on their Facebook Page, or on their Twitter account @heraldcomic. Print editions should be out sometime, maybe next year, I am not entirely sure on that. But until then please indulge your minds in the Herald: Lovecraft & Tesla. BUY IT NOW!

If you have checked out Herald: Lovecraft & Tesla