When Thanksgiving Was Weird

I just caught an interesting article about a strange tradition that used to be held in the United States in the early 1900’s. Linton Weeks, over at NPR news, has dug up an old tradition that many have forgotten, or never knew about. Thanksgiving Maskers, Ragamuffin Parades, or Parade of Fantastics, call them what you will, judging by the photos on Mr. Weeks’s post, Thanksgiving used to look a lot like Halloween.

So many people took part in this tradition that the mask making industry could hardly keep up. “The busiest time of the year for the manufacturers of and dealers in masks and false faces. The fantastical costume parades and the old custom of making and dressing up for amusement on Thanksgiving day keep up from year to year in many parts of the country, so that the quantity of false faces sold at this season is enormous.” – Los Angeles Times, November 21, 1897.

The young masqueraders would slink along the streets pan handling for pennies, apples, or other goodies, when asking “What’s for Thanksgiving?” It would be no surprise if you found yourself handing over a delicious candy to a faux Charlie Chaplin doppelganger or a creepy young lady with a nylon screen over her face for a mask. Ahh memories. Good stuff from Linton Weeks, and I highly suggest you check out his article to discover more of the forgotten truths and traditions of Thanksgiving in America. Click here to check out the strange side of a beloved tradition.

Another Kickstarter that flew under my weird radar has been fully backed. Miskatonic West is going to be an all new web series created by Harry Kakatsakis. The synopsis of the series is as follows:

In the world of HP Lovecraft; the creaking of a door, a shadow passing in your periphery or a bizarre siting at sea could mean any number of things, natural or supernatural. The massive sea god, Dagon, may have really existed in a primordial age. Whole civilizations of alien beings may have coursed across the Earth hundreds of millions of years ago. The ability to reanimate the dead may actually be possible. Lovecraft wrote about these possibilities at the turn of the 20th century. They thought he was a fiction writer. He wasn’t. Everything he wrote about exists, and now Lovecraft’s distinguished Miskatonic University has a Southern California location.

Miskatonic West follows the exploits of Sousaku Kaos, the head of Miskatonic’s biology department, and his band of intrepid students as they pull the curtain back on a world of monsters, magic and mystery inspired by the works of H.P. Lovecraft. Helping the LAPD with “cases of interest,” Kaos and his students must uncover a plot to awaken Dagon, the ancient ocean god, by the Esoteric Cult of Dagon, before it and an army of deep ones invade the West Coast.

In making Miskatonic West, the creators hope to bring the same verisimilitude and realism that Lovecraft brought to his writings of close encounters with the monstrous and supernatural. With an eye towards cinematic integrity, we want to bring the world of Lovecraft into an emotionally honest light and capture what it would be like to encounter things that should not be and the toll it might take on one’s sanity.

If you are a Lovecraft fan, a fan of monsters, mystery, suspense and human drama join us in making this web series a reality. Thank you.

I am personally looking forward to viewing this when some episodes are off the ground. Though it was narrowly fully funded, I believe this series could contain some quality Lovecraftian goodness. But i’ll let you be the judge of that. Below is the teaser/trailer for the series. Let me know what you think, or drop by their Facebook page and give them some feedback.

If you have checked out Miskatonic West 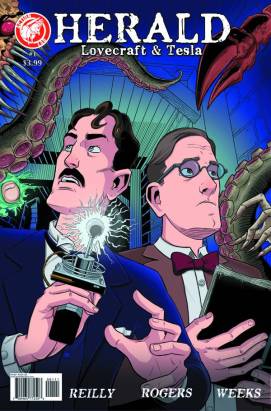 Rating: 4 out of 5 stars aligned

Back in 2012 the popular site io9 had a post with a very appealing picture that was their call to arms to create a Lovecraft/Tesla team-up comic for all of us to love. It looked sort of like this:

The image sparked all sorts of wants and protests for someone to establish a decent storyline where these two obscure characters in our history could investigate and dispatch the paranormal/occult. And thank the gods those wants and protests were heard and have been answered with John Reilly’s Herald: Lovecraft & Tesla.

This alternate history series there are a lot of things that didn’t jibe with me. That is until I came to terms that this comic series is an extreme alternate history twist from what I am used to. This was particularly difficult due to the fact that I consider myself a very (very very very) amateur Lovecraftian scholar, so when the years/time didn’t match up, and he was living with his mother still threw me off. However the sheer cleverness of this opening issue has compelled me to become a fan.

In this world Tesla is engaged to the very brave and prideful Amelia Earhart. When the future Mrs. Tesla takes off on her famous flight, Nikola becomes fearful of the equipment his darling is using make history. After seeking advice from his close friend, Einstein, Tesla heads to the home of famous alternate dimension aficionado, H.P. Lovecraft.

Though there isn’t a lot of action in this first issue, the creators of this comic have done an excellent creating this alternate world and its characters that are so familiar that one can’t help but cross the threshold of our current knowing of these two figures and believe in something a little more fascinating than reality. Along the way you will see other historical figures, such as: Harry Houdini, Albert Einstein, Amelia Earhart and of course H.P. Lovecraft. I can’t wait to see who else we will see…

From what I understand the second issue is to be released digitally on Comixology today, November 5th, so while your there checking out the first issue, be sure to just add that one to your cart to. You will not be disappointed. For all updates on this project and new issues check the status on their Facebook Page, or on their Twitter account @heraldcomic. Print editions should be out sometime, maybe next year, I am not entirely sure on that. But until then please indulge your minds in the Herald: Lovecraft & Tesla. BUY IT NOW!

If you have checked out Herald: Lovecraft & Tesla