Weird Review: When The Stars Are Right, By Scott R. Jones 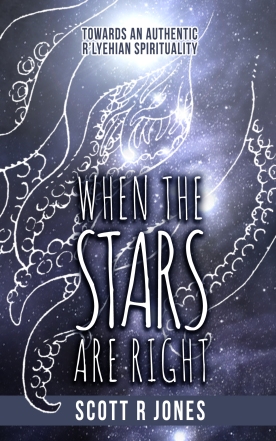 Title: When The Stars Are Right: Towards An Authentic R’lyehian Spirituality

In When The Stars Are Right, author Scott R. Jones deftly breaks down the barriers between the bright logic of our daytime intellect and the fearful non-Eucliean symmetries of our darkest dreams, revealing the Black Gnosis: a radical mode of being that anticipates a new appreciation of humanity’s place in an increasingly dire and indifferent cosmos. When The Stars Are Right asks the reader a simple question: “Are you keeping it R’lyeh?” The answers may surprise you.

“When all is madness, there is no madness”

A few months ago I was contacted by publishing company, Martian Migraine Press, and asked to review a fairly new book that explores a new spirituality based potentially off of the works of the late H.P. Lovecraft. Being primarily reviewer of weird fiction, I was a little reticent at first to consent to analyze anything non-fiction, let alone something set in a religious context. However also being a fan of Mr. Lovecraft, I had to see what this was all about.

For years I have been familiar with the H.P.L’s work, and for those years I have been submerged in minor research dealing with Lovecraft’s nihilistic world views, and how they influenced his writing. His outlook on human life as being meaningless paved the way for giant aliens, monsters, and deities that break our sanity only to put to scale how insignificant we humans really are in this vast universe. Though we might be able to stop these creatures from taking over our realm, there is always that underlying theme that beyond the veil of reality, there are always hellish entities scratching at the membrane of our dimension to break a passage through and reign supreme. But something that may be forgotten is that most of the time there are people behind these nightmarish creatures whose life’s purpose is to open the gates to let these things in. Cthulhu cults, worshipers of Yog-Sothoth, Witches of Azathoth all are bent on assisting their deities on ruling the universe, whether it be through some occult magic, or sacrifice. But that is not what Scott R. Jones preaches in his new book, When the Stars are Right: Toward an Authentic R’lyehian Spirituality.

What Mr. Jones has accomplished is beyond any Cult of Cthulhu, or Esoteric Order of Dagon. It is not so much a practice of occultism, but rather a philosophical approach to what Lovecraft may have been hinting at in his writings. Taking a more poignant stance behind Shub-Niggurath, Nyarlathotep, and Dagon and unveiling a study in character of each of the gods, taking into account what they stand for and what teachings they have in store for those who are enlightened by what Jones identifies as, The Black Gnosis.

“The Black Gnosis is madness, yes, and that madness is infinite and all engulfing and will consume a mind in order to free it, but the R’lyehian recognizes that there is nothing there to be consumed in the first place.”

This is technically the Zen of the R’lyehian. The knowledge and understanding, of what it means to truly believe the dreams that Cthulhu is broadcasting, and the acknowledgment that Nyarlathotep lies behind every message, both heard and unheard. But this is a level of clarity that is not reached through meditation, but rather through Divinely inspired Madness. It’s that moment, Jones explains, when the protagonist catches the merest glimpse of Dagon’s form as it embraces the white monolith and is plunged into a madness. The moment when Danforth peaks out side of the escaping plane in Mountains of Madness and sees the Plateau of Leng. That is the Black Gnosis.

Amid the teachings and direction induced by Jones, are personal events that endeavored the author to write such a tome. It is through these shared experiences that we begin to see a partial biography that guides the reader down the path Jones took toward finding his own R’lyehian spirituality.

I say his own, because this book does not possess a formatted practice for each follower. Rather asserts each reader to discover their own path, create their own altar, and write their own tome/Necronomicon to follow. There are no gods to worship, yet through the teachings that are presented through Cthulhu, Yog-Sothoth, Shub-Niggurath, and Dagon, one can find the advice and guidance needed to creating their own path. This outlook on religion being about philosophies and not consistent worship is a method of spirituality that allows the practitioners of it’s faith to find inner strength and peace of mind – or lack of it through the Black Gnosis – *wink wink.*

I myself am not very religious and don’t find much significance in the daily worship, but rather in the ideas that religions have to teach and be used toward humanity. Though Jones may have a darker outlook, it is a structure that is more appealing in today’s environment. I admit I did not agree with every theory he has to share, yet I felt a connection to this book that alone says good things.

In the beginning of the book, Jones immediately attempts, though respectfully, to dismiss Lovecraft’s doing in this spirituality. But what I think readers might not understand right away is that the dismissal is toward what the public has done with Lovecraft’s creations, and not what the man himself created. By which I mean, when reading this book, for the love of Cthulhu, don’t think of tentacle face slippers, Nyarlathotep plushies, or cutesy anime cartoon adaptations of any of Lovecraftian creations. Those things aren’t in the nature of Keeping it R’lyeh.

While reading this book I experienced some issues with my heart, which inevitably scared the hell out of me and my family. With doctors unable to explain what was happening, I was left with a mind full of anxious fear. Temporarily forgetting about the book in the midst of all the excitement, I found myself in a very negative frame of mind, and one day decided to pick it back up. Full of fear, and anger I found a new hope and acceptance in Jones’s words. Though, as I said, the book may have some darker spots than I needed at that time, it was all about the message that can be found within. No, I am not a R’lyehian, at least not yet, but I did take something away from my reading. And I believe there is something in there for anyone who may be looking for a sense of identity, or searching for a purpose in their life. You don’t have to pray to Cthulhu (though it might help,) nor do you have to partake in any occult worship. Just listen to your dreams and don’t be afraid of what they have to show you, and what messeges they might convey.

Weirdlings who’ve enjoyed When the Stars are Right have also checked out:

If you have checked out When The Stars Are Right: Towards An Authentic R’lyehian Spirituality

This entry was posted on June 16, 2014 by David Joseph. It was filed under Books, Reviews and was tagged with Black Gnosis, Cthulhu, H.P. Lovecraft, Keeping it R’lyeh, Martian Migraine Press, R'lyeh, R’lyehian, Religion, Scott R. Jones, Spirituality, When The Stars Are Right.