Thieves left the collection box alone as they acquired their target

It hasn’t been the best week for the Vatican. First a pair of peace doves are released to signify peace in Ukraine, where things aren’t going so well either, and attacked by not only a crow but a seagull. Not the best omen I think. Especially along side what has happened to a remote mountainside church in Italy.

Speculation has arisen over the theft of a religious reliquary containing blood from the late Pope John Paul II. Officials are pointing toward a satanic plot to steal the sacred relic and explain why.

“It’s possible that there could be Satanic sects behind the theft of the reliquary,” said Giovanni Panunzio, the national coordinator of an anti-occult group called Osservatorio Antiplagio. “This period of the year is important in the Satanic calendar and culminates in the Satanic ‘new year’ on Feb 1. This sort of sacrilege often take place at this time of the year. We hope that the stolen items are recovered as quickly as possible.”

Actually, the only Satanic holiday that is approaching is on February 2nd, Candlemas (Sabbat Festival). Not that I have a Satanic calendar hanging in my office, but I saw that their new year was in February , and wondered what other kinds of holidays they have. And let me tell you they don’t sound very fun. At least to me. Here’s a link to what their schedule of fun is like around the world…Calendar.

Anyway, Candlemas, from what I understand, is a blood ritual, which is fitting since the stolen item is a blood relic. This is where I get confused. Upon searching the good ol’ internet I have found that it is uncertain what relic was stolen. I have come across a vile of the late Pope’s blood and a blood soaked piece of gauze from John Paul II when he was shot in St Peter’s Square in 1981. Both are pictured below. 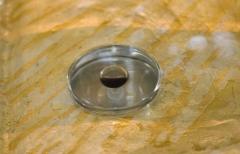 So in this blood right the vile would prove more valuable than the blood soaked piece of gauze, but beings its blood of the Pope, that’s got to be some pretty high-end stuff.

If you like all the tasty bits we gibber about here, become a follower or submit to receive email updates with every new post! Check us out on Twitter @UnspkbleGibberr and on Facebook at http://www.facebook.com/UnspeakableGibberer.

Publisher: Self Made Hero

“That is not dead which can eternal lie…”       Out of the uncharted places of the world and the prodigious imagination of Howard Phillips Lovecraft, renowned master of the eerie, come nine nightmarish tales of terror. From the dreaded remnants of long-dead civilisations to unhallowed monstrosities scheming in the darkness, Lovecraft’s stories have never lost their power to astound and unsettle. This graphic anthology breathes new life into classic works of weird fiction.       “…and with strange aeons even death may die.”

Looking back on my review for The Lovecraft Anthology: Volume 1, I have reflected on some of my comments. To this day, I still visit the pages of volume 1, and have to disagree with some of those late comments. Though I still believe the illustrated panels are what make up an efficient comic/graphic novel, it is the words we rely on when our eyes get ahead of us and we need to read whats happening to interpret the image. After all, we’re readers not viewers of these works. That said, most of these works are illustrated so brilliantly that my eyes hardly touched a word. I am very familiar with Lovecraft’s work, and know a few of his tales like old songs. So for a lot of these addaptations I was fortunate enough to know what was happening and only needed the images to carry me through.

In the tradition of how I formatted the review for Volume 1, I have listed each adaptation and have a small something to say about each.

Pickman’s Model, adapted by Jamie Delano, illustrated by Steve Pugh, Staging by Jon Haward: Right out the gate Dan Lockwood enlists one of his best choices for this collection. Delano, Pugh, and Haward have worked magic into bringing this piece to life. Every panel, every phrase took me down into the cellar with Thurber and Pickman and had me filling in the blanks as to what damnable creations Pickman was responsible for. Great stuff!

The Temple, adapted by Chris Lackey, illustrated by Adrian Salmon: Everything about this entry is spot on. The hard shapes, thick lines, and heavy shading are appropriately placed for the era this story is set in. You can tell Lackey has a fondness for the tale and does what he can to capture the images meanings.

From Beyond, adapted by David Camus, illustrated by Nicolas Fructus: Another grandslam for this graphic collection. Great accompaniment by Camus, but anyone can tell, Nicolas Fructus gets what this story is about. Amazing fuscia/violet panels that has set my pineal gland a fire!

He, adapted by Dwight L. MacPherson, illustrated by Paul Peart Smith: I really dislike Lovecraft’s original story, however I believe MacPherson and Smith have done and excellent job with a crappy tale. The illustrations weren’t my favorite but I did enjoy the protagonist looking just like H.P.L.

The Hound, adapted by Chad Fifer, illustrated by Bryan Baugh: I feel this adaptation took on a bit of the Harley Warren/Randolph Carter archetype, St John being the dominant male figure. Baugh’s sepia skinned panels stand out from the other adaptations in this book, while Fifer adds a comedic style to the dread he portrays.

The Nameless City, adapted by Pat Mills, illustrated by Attila Futaki, Colored by Greg Guilhaumond: A clever recreation of a fundamental Lovecraft piece. The ending was unfamiliar, though it may have hinted to a possible “origins” tale of the Terrible Old Man…Maybe…

The Picture in the House, adapted by Benjamin Dickson, illustrated by Mick McMahon: To me the story is best told as a literary tale, maybe even a short film. Unfortunately the backwater dialogue is pretty hard to follow panel to panel, and McMahon’s illustrations did not captivate my attention.

The Festival, adapted by Simon Spurrier, illustrated by Matt Timson: This is my favorite adaptation in this collection. Changing up the format a little to more of a picture book quality, Spurrier and Timson have portrayed a horrifying experience that leaves the reader still wanting to visit Kingsport again and again. I only wish this was the closer in the collection.

The Statement of Randolph Carter, adapted by Dan Lockwood, illustrated by Warwick Johnson Cadwell: I don’t have much to say about this adaptation. Closing out the collection and with one of H.P. Lovecraft’s best known short works, I thought this would have been done better. Didn’t care for the illustrations, and the writing did little to keep me interested.

All in all, I would recommend this volume over the first. Both are a must if you are an H.P. Lovecraft fan, and just necessary to have to stimulate ones imagination. Again, Dan Lockwood has done an amazing job gathering these brilliant artists and writers to collaborate in creating such great work. This is what feeds the Lovcraftian community and what grows the population of new readers of the late mans legacy. As I said while closing my review for volume 1, I really hope that these volumes continue to be made. I know there are only so many short stories that one can adapt (We’ll leave the larger adaptaions to I.N.J. Culbard!) but maybe new artist can give their take on a tale and give us some new perspective. This review took me a pathetic one year to complete, and in a way I am happy it did. I read it in a white heat, immediately following The Lovecraft Anthology: Volume 1, and didn’t have the best opinions of the work. After a year of continuous viewing of volume 2 I have come to the conclusions you have already read. My thoughts on volume 1 have changed as well, however I must leave my initial thoughts on the piece as they are. Either way I hope you enjoy both volumes as I have and continue to do. Cheers.

If you have checked out The Lovecraft Anthology: Volume 2

You know the works of H.P. Lovecraft have permeated society when the number one name choice at, NameMyDaughter.com, is Cthulhu All-Spark. That’s right folks, as I write this post, those are the most popular first and middle name ranked. There is a big 50% chance she will either be the coolest kid in school, due to the growing popularity of Lovecraft’s works, or the most picked on (I know, I went to school with a girl whose name was Sunshine Bear… Yeah.) But of coarse the Dad is behind this one, and has been cleaning up the absolutely ridiculous suggestions such as, WackyTaco692, stating: “We will ultimately be making the final decision, Alas my daughter shall not be named WackyTaco692. Sorry guys the wife wouldn’t go for a free for all.”

Some of the other crazy suggestions in the top 15 are: Laquisha, Megatron, Zelda, Not Zelda – Seriously…, Slagathor, and Streetlamp. Yes I said Streetlamp.

*UPDATE* As I type I see that the game has changed and Cthulhu has been bumped for Amelia All-Spark McLaughlin! Some glitch must have happened because I see Amelia has the number of votes Cthulhu had, and Cthulhu is down about 900 votes. The runner-up for middle name is Mae. Everyone gets one vote, per name, per household, per day until April 2nd, which is the due date, so hurry over to NameMyDaughter.com to place your vote or new name suggestion.

Though it is crazy to let the internet name your child, I do find this pretty funny. I remember attempting to convince my wife that our daughter, Dylan’s middle name should be Lovecraft. She didn’t buy it.

**UPDATE #2** As of 5:39 am this morning, (the day after this was originally posted) Cthulhu All-Spark McLaughlin is in the lead. Numbers have jumped over 50,000 votes alone in the last 24hours. Will this get interesting, or be a landslide?