Welcome to Hoxford by Ben Templesmith 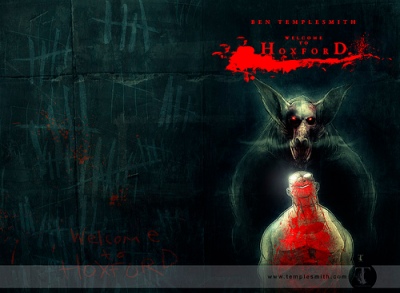 Life has been hard for Raymond Delgado. Abuse, war, and death have changed his perspective on life, and now, he believes he’s a god. With a reputation of not playing well with others, and after being bounced around from prison to prison, Ray finds himself on a first class right to Hoxford. Maintained by Warden Gordon Baker, Hoxford is a privately ran institution that has a reputation of harboring prisoners that will never be released unto the world. But there’s something else about Hoxford, something dark, and Ray can smell it. Off his medication and into the land of delusion that makes up his reality, Ray, the new god, is the only hope for the insufferable crew that inhabits the cells of this damned prison.

,a gripping tale that left me feeling more thoughtful rather than perplexed.

Mr. Templesmith’s line of work is quite prolific. Most might know his work from the graphic novel, 30 Days of Night

, and his adaptation of Bram Stokers, Dracula

. He has been nominated for several Eisner Awards, International Horror Guild Awards, and has won a Spike TV Scream Award.

is a gripping tale that I believe is best shown through Templesmith’s art. I went through the book three times right away when I got it. First, like any excited kid, to see the pictures, and to see if I could get a sense of what the story was by the art alone. Second, I read through it. And third, I went through it with the two put together. I liked what I saw, but I felt the writing fell kind of flat from time to time. Like the rise and fall of a good tune though, it kept me flowing. I wasn’t exactly sure about how the whole things ends, but I feel like I took something away from the story that some people might not get.

, but something I admired was the character, Ray Delgado’s way of thinking. I’ve been told before by people, “The world is what you make it”, and “If you believe it enough, you make it true.” And that is something that I believe was a strong characteristic of Ray. Sure, he thought he was a god, and had a problem with biting… people. He believes he’s so powerful, that in fact, he says he will kill our god at a time of his choosing. So when shit hits the fan, and it does, it’s no surprise that this man will not back down without a fight. He believes in himself so much that his power comes from within. Something that supported my theory is the way the book ends. Though he ends on top, he’s not a god, and he changes his perspective again, which makes me think he really is a schizophrenic pshycho that can’t get his mind right on what he wants to be in this world.

Besides the ending, I enjoyed and continue to enjoy this book. There is something about Templesmiths art that reminds me of Ralph Steadman, but with more attention to detail, I like that. I have had it for about a week, and I have gone through it eight times. So I say check this one out folks.  While you’re at it check out Ben’s blog or his Official site by clicking the links or clicking on the banner in the middle of the page. His work is available at Amazon.com

, or his site. I must admit that I came across this story after viewing the fan made film below. Great adaptation of this story, and I think you all would enjoy. Im giving this one 4 out of 5 stars in alignment.

Welcome to Hoxford, the fan film from Julien Mokrani on Vimeo.

This entry was posted on January 20, 2012 by David Joseph. It was filed under Graphic Novel/Comics, Reviews and was tagged with Ben Templesmith, Dark Fiction, Graphic Novel, Horror, IDW, Welcome to Hoxford.