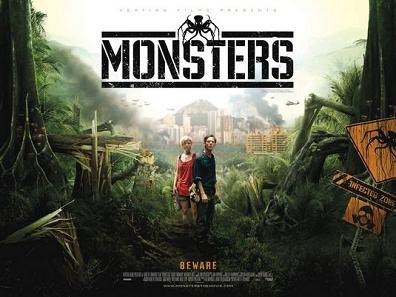 So, let me start by saying that you can’t judge a book by its cover, like you can’t judge a film by its posters, teasers, trailers etc… What I mean by the later is when you see an upcoming flick with a name like, oh well say MONSTERS, accompanied by a poster that reflects a semi-apocalyptic world, you think you’re going to get some monsters. Right?

The premise: Six years ago NASA discovered the possibility of alien life within our solar system. A probe was launched to collect samples, but crashed upon reentry over Central America. Soon after, new life forms began to appear and half of Mexico was quarantined as an INFECTED ZONE. Today, the American and Mexican military still struggle to contain “the creatures” … The story begins when a U.S. journalist agrees to escort a shaken American tourist through the infected zone to the safety of the U.S. border.

Ok now that were all on track let’s get into this thing. Written and directed by Gareth Edwards, Monsters

, is more of a soft apocalyptic romance than the thriller it’s advertised to be. I was very captivated by the beautiful cinematography, and how Edwards was able to pepper in signs of destruction so naturally. I figured the story between Andrew (Scoot McNairy) and Sam (Whitney Able) would turn into a romantic one, because people seem to come together in times of survival. But I found it hard to sympathize with two people who had to cross “dangerous” territory to get back to America for no particular reason.

After a half-hour in of character building, the only thing that kept me watching was the hope of some serious “monster” action, since the title seemed to imply I might see some. I can’t even remember the word “monster” even being used in the film. The aliens seem to come in two sizes, big spidery Octopuses, which I thought were Cthulhu Spawns, and the larva that grow on the trees of the Mexican jungle that make up the “Infected Zone”. Through the whole movie we get glimpses of dead tentacles and eerie sounds from the shadowed jungle, but we never get a clear shot of them because they come out at night. Nothing about them seems scary, and they only do violent things when provoked or attacked, leaving us to believe they are a docile species and we’re the ones over reacting.

I don’t want to give away the ending in case there is anyone who wants to check it out for themselves, but I wasn’t impressed at all. For those who have heard, or think this is the next District 9

your sadly mistaken, and it’s a crime to compare Monsters

to the likes of it. Im giving this feature a single shining star. Bing

This entry was posted on January 15, 2012 by David Joseph. It was filed under Movies, Reviews and was tagged with Cthulhu, District 9, Gareth Edwards, Infected Zone, Monsters, Monsters 2, Movie, Sci-Fi, Scoot McNairy, Whitney Able.